Turkey has evacuated an observation station in Syria’s northwestern Hama province that had been encircled by Syrian government forces.

The outpost in Morek had been Turkey’s largest in the province, which is now under the control of Syrian President Bashar al-Assad.

Assad’s troops encircled it last year after an offensive on the province of Idlib, which is the last opposition stronghold in the country.

He said the troops would be redeployed to Turkish outposts in Idlib. 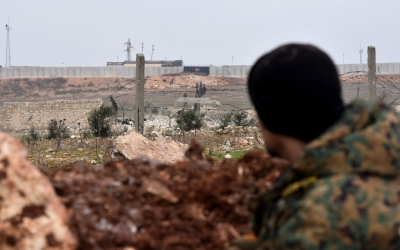 EXCLUSIVE: Turkey to abandon some observation stations in Syria’s Idlib

Two people familiar with the decision told MEE on Monday that the Turkish military would be withdrawing from four observation stations and two military sites that were surrounded by Syrian government forces.

“The observation stations are in the areas that are hard to defend in the current predicament, such as Morek and Shir Maghar,” one of the people said.

“The military sites are near Saraqeb.”

Turkey set up 12 ceasefire observation stations in and around Idlib following a 2017 agreement that warded off a Russian-backed Syrian government offensive that threatened to collapse rebel rule in the province and force millions of refugees to the Turkish border.

Turkey has long supported Syrian rebel forces in Syria, some of which it has used in multiple operations across Syria’s northern border against the Islamic State group and Kurdish forces that Turkey sees as a threat to its integrity.

MEE’s sources said the Turkish military had decided to withdraw following a series of developments.

First, they said, Russia either blocked or severely impeded Turkey’s ability to resupply its positions.

“The regime also brought so-called civilians in buses to near the military stations, pushing them to attack the Turkish soldiers. These were regime provocations,” one said.

Since March a ceasefire has heavily reduced fighting, but intermittent air strikes and artillery attacks continue.