Nine out of 10 Syrian refugee families in Lebanon are living in extreme poverty amid “compounded crises” in the country, a United Nations report says, highlighting the worsening humanitarian situation, increasing food prices and the Covid-19 pandemic.

In a report released on Friday, the United Nations High Commissioner for Refugees (UNHCR), the World Food Programme and the Children’s Fund (Unicef) warned that 89 percent of Syrian refugee families in Lebanon are struggling to fulfil their most basic needs, compared with 55 percent the year before.

The sharp increase reflects the “compounded crises Syrian refugees have been facing in Lebanon,” the statement said.

The country is experiencing its worst economic crisis in decades, with a plummeting currency, widespread layoffs, soaring prices and rising poverty. A deadly explosion in August devastated a large part of the capital Beirut.

“The economic downturn, steep inflation, Covid-19 and finally the Beirut blast have pushed vulnerable communities in Lebanon – including Syrian refugees – to the brink,” the UN report said on Friday.

Lebanon hosts about 1.5 million Syrians, two-thirds of whom are registered as refugees. Given that the population of Lebanon is about six million, the influx that has taken place since 2011 has been significant. Meanwhile, 74 percent of Syrians in Lebanon lack legal status.

Syrian refugees are now living on less than 309,000 Lebanese pounds per person per month, according to Friday’s report. While Lebanon’s official exchange rate converts that amount to $205, in reality, the current black market conversion is about $38.

“The situation of Syrian refugees in Lebanon has been deteriorating for years, but the findings of this year’s survey are a dramatic indication of how difficult it has become for them to make it through another day,” Mireille Girard, UNHCR representative in Lebanon, said. 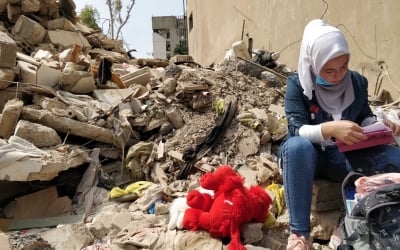 “The key findings are released at a time when Syrian refugees are facing their hardest winter yet in Lebanon, braving the weather elements with very little to stay warm and safe,” Girard said.

The findings of the survey indicated that the average amount of debt accumulated by households has increased by 18 percent this year, with 93 percent of refugee families reporting that the main reason for incurring debt was buying food, followed by rent and medicine.

Food prices in Lebanon have almost tripled since October 2019, according to the report.

Half of the families surveyed were suffering from food insecurity, up from 28 percent the previous year. Researchers also found that households with inadequate diets had doubled to 49 percent from 25 percent in 2019, while those resorting to “damaging food coping mechanisms” such as reducing the number of meals per day or reducing food portions is also on the increase.

The agencies warned that other “coping strategies” included the early marriage of children, withdrawing them from school and sending them to work.

Last month, a Syrian refugee set himself on fire in Beirut to protest against the conditions he and his family have endured in the country. A spokesman for Lebanon’s Internal Security Forces said the incident occurred because the man, who survived, could not afford medical treatment for his sick daughter.